Hi friends!  So here’s the thing.  When I started my blog, I intended on doing some With Bated Breath posts and then I didn’t do them.  I’ve done them for new releases each month, but I meant it to be more fun than that.  I kind of let Waiting on Wednesday take its place, but I’ve never really felt like that meme was the right fit for me or my blog.  I don’t want to talk about just one book a week, and I don’t want to just talk about books that are upcoming.  I want to talk about any book that’s made its way onto my TBR in the last week or so, and let you know where I heard about it too, since this will give you the chance to see the wonderful reviews and posts that led me to said books.  With Bated Breath is part Waiting on Wednesday, part On the Smuggler’s Radar, but mostly it’s my own damn thing.  Enjoy! 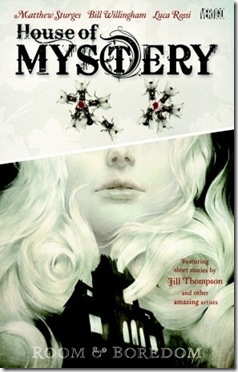 Matthew Sturges, writer of the Eisner-nominated JACK OF FABLES, and his JACK co-writer Bill Willingham, proudly unlock the doors to the HOUSE OF MYSTERY, a series that reinvents a classic DC Comics comic. HOUSE OF MYSTERY focuses on five characters trapped in a supernatural bar, trying to solve the mystery of how and why they’re imprisoned there. Each one has a terrible past they’d like to forget, and with no books, newspapers or TV allowed in the House, they face an eternity of boredom. But stories become the new currency, and fortunately, the House attracts only the finest storytellers.

I came across this one last week while reading a fantabulous interview with one of my favorite authors, Bill Willingham, over at Omnivoracious.  Bill Willingham is the author of one of my all-time favorite graphic series, Fables, and even though I’ve never picked up Jack of Fables (because quite frankly he’s the Fables character I dislike most), I really want to check out this series that is set to complete this August.

Basically, it sounds like a No Exit type set up that can produce absolutely any kind of story imaginable.  Count me in! 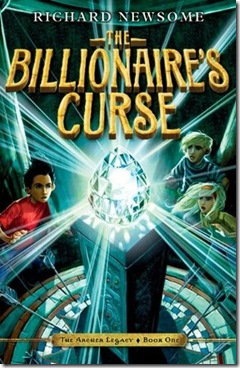 The Billionaire’s Curse by Richard Newsome
May 18th, 2010 by Walden Pond Press
[Amazon|GoodReads]

Hello, Gerald. I hope this isn’t too weird for you—a letter from beyond the grave! By now you are my heir and worth a good deal of money. I hope you don’t mind. . . . I expect you’ve figured out that I was murdered. I would like you to find out who did it.

Gerald Wilkins had only been hoping for a ski holiday, but plans change when a great aunt he’s never met leaves him her entire estate worth twenty billion pounds! Whisked by his parents to London, England, Gerald is given a letter and told not to open it until after the funeral.

Now he’s got a mystery to solve. With the help of his new friends, Sam and Ruby Valentine, Gerald follows the clues into secret passageways, a musty jumbled bookshop, an ancient crypt and a colossal cavern where the secret of a priceless treasure lies protected by deadly booby traps.

This series was originally published in Australia, but was picked up for publication in the U.S. by one of my favorite MG imprints—Walden Pond Press!  To celebrate the release of the third book in the trilogy this past week, The Billionaire’s Curse was free for one day only on Kindle.  I snagged it up, because Walden Pond Press has never steered me wrong with gems like Neversink and The Hero’s Guide to Saving Your Kingdom.  Completely forgot to put this one in my last IMM, so had to feature it here! 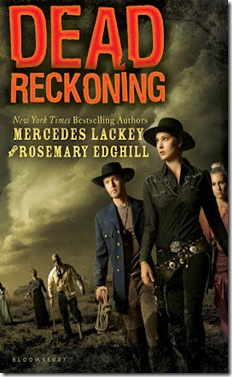 Jett is a girl disguised as a boy, living as a gambler in the old West as she searches for her long-lost brother. Honoria Gibbons is a smart, self-sufficient young woman who also happens to be a fabulous inventor. Both young women travel the prairie alone – until they are brought together by a zombie invasion! As Jett and Honoria investigate, they soon learn that these zombies aren’t rising from the dead of their own accord … but who would want an undead army? And why? This gunslinging, hair-raising, zombie western mashup is perfect for fans of Cowboys vs. Aliens and Pride & Prejudice & Zombies.

Okay, this is one of those where the ‘perfect for fans of list’ really turns me off, but I still totally broke my own rules about NetGalley requests for this one because Mercedes Lackey is one of my all time favorite authors, and if there’s one trope I can’t resist it’s freaking girls disguised as boys.  Thanks so so much to Misty of The Book Rat for bringing this one up in one of her Coming Attractions posts, or it would have flown right over my head.  As is I must have it. 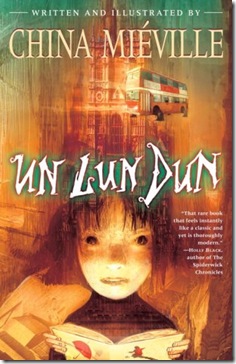 What is Un Lun Dun?

It is London through the looking glass, an urban Wonderland of strange delights where all the lost and broken things of London end up . . . and some of its lost and broken people, too–including Brokkenbroll, boss of the broken umbrellas; Obaday Fing, a tailor whose head is an enormous pin-cushion, and an empty milk carton called Curdle. Un Lun Dun is a place where words are alive, a jungle lurks behind the door of an ordinary house, carnivorous giraffes stalk the streets, and a dark cloud dreams of burning the world. It is a city awaiting its hero, whose coming was prophesied long ago, set down for all time in the pages of a talking book.

When twelve-year-old Zanna and her friend Deeba find a secret entrance leading out of London and into this strange city, it seems that the ancient prophecy is coming true at last. But then things begin to go shockingly wrong.

So this week I kind of fangirled all over China Miéville’s new YA book, Railsea.  Fell for his writing hard core.  And the lovely Catie of The Readventurer was kind enough to point out to me that if I enjoyed the quirkiness, I’ll probably especially enjoy his MG book, Un Lun Dun.  MG Miéville you say?  Sign me up!  If you need convincing, you should check out Catie’s review here. 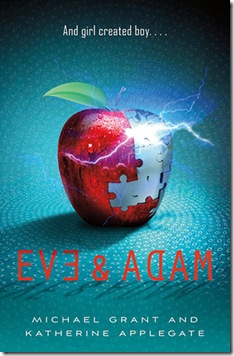 Sixteen-year-old Evening Spiker lives an affluent life in San Francisco with her mother, EmmaRose, a successful geneticist and owner of Spiker Biotech. Sure, Evening misses her father who died mysteriously, but she’s never really questioned it. Much like how she’s never stopped to think how off it is that she’s never been sick. That is, until she’s struck by a car and is exposed to extensive injuries. Injuries that seem to be healing faster than physically possible.

While recuperating in Spiker Biotech’s lush facilities, she meets Solo Plissken, a very attractive, if off-putting boy her age who spent his life at Spiker Biotech. Like Evening, he’s never questioned anything… until now. Solo drops hints to Evening that something isn’t right, and Emma-Rose may be behind it. Evening puts this out of her mind and begins her summer internship project: To simulate the creation of the perfect boy. With the help of Solo, Evening uncovers secrets so big they could change the world completely.

I’m honestly having a hard time coming up with where I first heard of Eve and Adam, but I know I decided pretty readily that I wanted to read it.  It may have been when perusing the BEA lists (because YES, this will be there), in an edition of On the Smuggler’s Radar over at The Book Smugglers, or browsing Macmillan’s fall catalog, but wherever it was I first heard of Eve and Adam, I know for certain I’ll be hearing a lot more.

Side note: Why have I not yet read any Michael Grant?  Everything his name is on makes its way to my TBR, but I have yet to touch any of them.  Shame on me, maybe this will be my first? 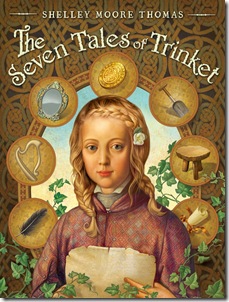 Guided by a tattered map, accompanied by Thomas the Pig Boy, and inspired by the storyteller’s blood that thrums through her veins, eleven-year-old Trinket searches for the seven stories she needs to become a bard like her father, who disappeared years before. She befriends a fortune-telling gypsy girl; returns a child stolen by the selkies to his true mother; confronts a banshee and receives a message from a ghost; helps a village girl outwit—and out-dance—the Faerie Queen; travels beyond the grave to battle a dastardly undead Highwayman; and meets a hound so loyal he fights a wolf to the death to protect the baby prince left in his charge. All fine material for six tales, but it is the seventh tale, in which Trinket learns her father’s true fate, that changes her life forever.

This one I know I only found through Macmillan’s fall catalog, and I am so glad I did!  This looks exactly like the type of MG I love.  I love historical, fairy-tale like adventures, and I adore this cover that reminds me of Catherine Called Birdy.

This being my first issue, I could certainly go on, but I’m going to restrain myself so that I have some fodder for next time!  Let me know what books, new or old, you’ve added to your TBR as of late.

Review: The Prince Who Fell From the Sky by John Claude Bemis »
« Review: Sloppy Firsts by Megan McCafferty