Waiting on Wednesday: Throne of Glass by Sarah J. Maas

“Waiting On” Wednesday is a weekly event hosted at Breaking the Spine, that spotlights upcomign releases that we’re eagerly anticipating. 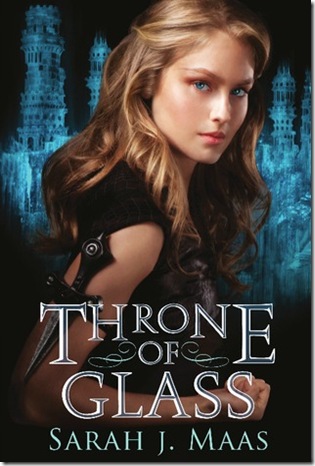 After serving out a year of hard labor in the salt mines of Endovier for her crimes, 18-year-old assassin Celaena Sardothien is dragged before the Crown Prince. Prince Dorian offers her her freedom on one condition: she must act as his champion in a competition to find a new royal assassin.
Her opponents are men—thieves and assassins and warriors from across the empire, each sponsored by a member of the kings council. If she beats her opponents in a series of eliminations, she’ll serve the kingdom for three years and then be granted her freedom.
Celaena finds her training sessions with the captain of the guard, Westfall, challenging and exhilarating. But she’s bored stiff by court life. Things get a little more interesting when the prince starts to show interest in her… but it’s the gruff Captain Westfall who seems to understand her best.
Then one of the other contestants turns up dead… quickly followed by another. Can Celaena figure out who the killer is before she becomes a victim? As the young assassin investigates, her search leads her to discover a greater destiny than she could possibly have imagined.

I’ve been waiting to feature this one until the cover revealed, and lucky me it came out Monday!  I have to admit I’m really disappointed in it though.  I wish there hadn’t been a model on the front, but I tend to prefer covers that don’t feature people period.  Ah well, we can’t win them all.  Maybe I’ll be happier with the paperback.  STILL!  So excited for this one.  It’ll be my third play on Cinderella this year, but that doesn’t make me any less pumped for another fantastic female assassin book after falling hard for Grave Mercy.  I have the first e-book prequel on hand, and am hoping to read it sometime in the next week or two.  Biting my nails hoping that the book won’t disappoint!