Waiting on Wednesday: Embers and Echoes by Karsten Knight

“Waiting On” Wednesday is a weekly event hosted at Breaking the Spine, that spotlights upcomign releases that we’re eagerly anticipating. 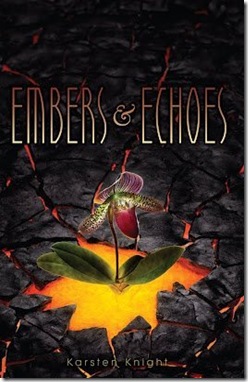 Ashline Wilde is about to discover that when you’re the reincarnation of a Polynesian volcano goddess, “new beginnings” are just a myth.

Leaving the fiery ruins of her sophomore year behind her, Ash travels to the sizzling beaches of Miami, hot on the trail of the little sister she’s only seen in visions. But her happy family reunion isn’t all palm trees and paradise. A cult of evil gods-on-earth, known as the Four Seasons, has kidnapped her sister to use in its terrifying new religion. Soon, the streets of Miami erupt in chaos and violence…and Ash gets caught right in the tropical crossfire

Ash isn’t without help, however. Unexpected romance arrives in the form of Wes, an Aztec god of night with his own vendetta against the Four Seasons. As memories of Ash’s previous life begin to flicker into her dreams, the boundaries between ally and enemy, life and death, and love and hate all bleed together. And when a mysterious trickster from her past reappears to derail her new quest, Ash must choose between the echoes of a once-forgotten yesterday and the embers of an uncertain future.

Because when old flames return from the dead, even a volcano goddess can get burned.

I read Karsten Knight’s debut, Wildefire, the first in the series last fall and really enjoyed it.  The series has a fun take on mythology, where gods are reincarnated each generation, and he writes about a wide variety of mythologies including Norse, Egyptian, Polynesian, and Hopi.  Looking forward to the next installment!  I may have to dredge up my memories so that I can review this series on the blog.  I don’t like the cover for Embers & Echoes as much as I liked Wildefire’s, but ah well.  What are you waiting on?

Review: The Miseducation of Cameron Post by Emily M. Danforth »
« Salute Your Shorts: A Questionable Client by Ilona Andrews