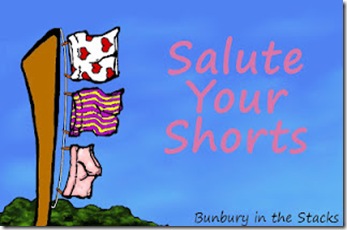 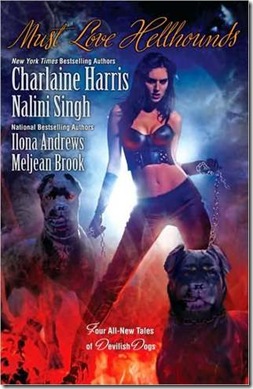 Title: Magic Mourns in Must Love Hellhounds [Amazon|GoodReads]
Author: Ilona Andrews [Website|Twitter|Facebook]
Standing: Magic Mourns is a Kate Daniels novella between books 3 and 4.  This anthology also includes 3 other novellas which are part of the Guild Hunter, Sookie Stackhouse, and The Guardians series.  As I have not read these other series, I did not read the other 3 novellas.
Genre: Urban Fantasy
Published: September 1st, 2009 by Berkley Trade
Format:  Paperback; 361 pages. Magic Mourns alone is around 90 pages.
Source: Borrowed from my local library.
Alternative Source: Magic Mourns is also available to purchase as an e-book single here.
Spoilers!: This review contains very minor spoilers for Magic Bites (reviewed here), Magic Burns (reviewed here), and Magic Strikes (reviewed here).  One could, theoretically, read this story without having read other Kate Daniels novels.

The phone rang again.  “Order of the Knights of Merciful Aid, Andrea—“
”Can I speak to Kate?”  An older male voice tinted with country accent.
”I’m filling in for her.  What do you need?”
”Can you take a message for her?  Tell ‘er this is Teddy Jo callin’ down from Joshua Junkyards.  She knows me.  Tell her I was drivin’ on through Buzzard, and I saw one of them fellers she hangs out with, the shapeshifters, run like hell through the Scratches.  Right below me.  There was a big dog chasin’ him.”
“How big was the dog?”
Teddy Jo mulled it over.  “I’d say as big as a house.  A one-story.  Maybe a bit bigger.  Not as big as one of them colonials, you understand.  A regular-person house.”
”Would you say the shapeshifter was in distress?”
”Hell yeah, he was in distress.  His tail was on fire.”
”He ran like his tail was on fire?”
”No, his tail was on fire.  Like a big, furry candle on his ass.
Bing.  Green five, shapeshifter in dire distress.  “Got it.”

When I picked up Magic Mourns, I was expecting Kate.  What I got was Andrea.  The shift in narrators was a surprise for me, but not an unwelcome one.  I love me some Kate, but I’ve really enjoyed Andrea’s character in the past two books, and knowing that Gunmetal Magic is coming out this summer with her PoV, I was pumped for the preview.  And friends, Magic Mourns did not disappoint!

Often, when you pick up new narration by the same author, it’s incredibly similar.  However, Ilona Andrews really took me by surprise with Andrea.  She doesn’t write the same for this character at all.  Sure, it’s still written very well, but Andrea’s thought process is different to Kate’s.  We see that not only in her mental dialog, but because it is written in first person, we see it in every word.  Andrea’s narration isn’t full of well-known phrases and clichés, it’s not as clipped, moody, or sharp; it is another strong butt-kicking chick with a wry sense of humor, and I am now more than ever a fan of Andrea’s.

I’m going to say after the past three books, Ilona Andrews kind of owed us this one.  Magic Mourns tells the story of Andrea dealing with duty without Kate.  When she receives word of the (supposedly) giant dog chasing a shapeshifter outside of the city, she heads out to check the scene.  There she finds, much to her dismay, Rafael.  Rafael running from what is, indeed, a three headed dog the size of a house.  Andrea doesn’t particularly want to work with Rafael, but she doesn’t want to leave the guy either.  She wants to create a better bond between herself and the Pack, hoping that she can earn a position of trust similar to Kate’s, making relations easier for everyone.

As always, we get a fun and unique play on mythology (Greek this time), but with it comes the gratification of Andrea and Rafael, and how their relationship differs from Kate and Curran’s.  Andrea and Rafael, unlike the other couple mentioned, actually acknowledge and talk about the issues between them.  For better or worse, at least they have some form of communication going.  Magic Mourns also gives us better insight into Andrea’s past.  We’ve known she is beastkin, but other than the stigma involved, we’ve been a little blind to what that really meant for her growing up.  I was incredibly interested to have her past laid bare, appalling as aspects of it may be.  Where Ilona Andrews has been giving us snippets of Kate’s past and relationship with Curran slowly over 3 novels, it was really quite satisfying to learn so much about another character in such a short period of time.  Not that I’m complaining about Kate’s pacing, quite the opposite, I love it, but that doesn’t mean I don’t need to be thrown a bone every once in a while.  Andrea’s story was well paced, informative, and the perfect balance between action and romance.

Overall, Magic Mourns is a must read for Kate Daniels fans, particularly those preparing to enjoy Gunmetal Magic!

Leave a Reply to Review: Magic Slays by Ilona Andrews « Bunbury in the Stacks Cancel reply