Review: The Prince Who Fell From the Sky by John Claude Bemis 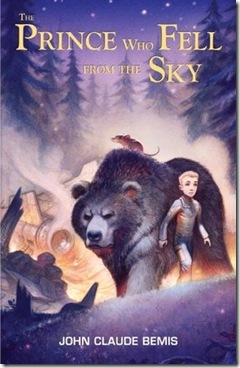 In Casseomae’s world, the wolves rule the Forest, and the Forest is everywhere. The animals tell stories of the Skinless Ones, whose cities and roads once covered the earth, but the Skinless disappeared long ago.

Casseomae is content to live alone, apart from the other bears in her tribe, until one of the ancients’ sky vehicles crashes to the ground, and from it emerges a Skinless One, a child. Rather than turn him over to the wolves, Casseomae chooses to protect this human cub, to find someplace safe for him to live. But where among the animals will a human child be safe? And is Casseomae threatening the safety of the Forest and all its tribes by protecting him?

Middle-grade fans of postapocalyptic fiction are in for a treat with this fanciful and engaging animal story by the author of the Clockwork Dark trilogy.

Anyone who’s been reading my reviews for a while now has probably realized that I love when a book puts a spin on my traditional way of thinking.  I don’t always agree with the spin, but I like knowing it’s out there affecting the way people think about things.  The Prince Who Fell From the Sky was one of those books.  I was worried on more than one occasion that it would cross the line into ‘big message’ territory and make me groan, but it didn’t!  John Claude Bemis weaved his tale with a deft hand in a way that made me think without making me feel like I was being judged.  Not completely easy for a story about post-apocalyptic earth where the humans live no more and animals pass down stories of the Skinless Ones’ cruelty to the Forest.

The Prince Who Fell From the Sky was an interesting weave of native mythology, animal fantasy, and the currently popular post-apocalyptic setting.  The main character, Casseomae (or Cas for short), is an aging bear with the instincts and desire to be a mother.  Unfortunately, all of her cubs have been stillborn.  As a result, she feels very protective of all those in need, saving each member of the band repeatedly throughout.  When the Skinless Ones fall from the sky (presumably in some sort of space craft) and a child emerges, Cas refuses to let the hierarchy of the Forest kill him, despite the risk.  The only memories creatures of the forest have of the Skinless Ones are of killing and destruction. She sets off with the companionship of a somewhat knowledgeable rat, a Faithful dog, and the ‘cub’ in tow.

The Prince Who Fell From the Sky is the story of unlikely partnerships between animals of different standing and relation to humans.  It seems that each type of animal has their own stories and myths about humans, and I loved to see the alternate takes that the animals had.  The greatest humor of the book sprouted from Dumpster, the rat who begrudgingly journeys alongside Cas in search of his Mischief and the Havenlands.  He is the Memory for his Mischief, the one who is supposed to remember all of the stories and history.  As such, he considers himself the authority on all things human, but of course, at least half of his ideas are laughably ridiculous and nonsensical to our human minds.  For example, the idea that people had fire escapes on buildings so they could escape fire on the ground and run up to safety.

The relationship between Cas and the ‘cub’ is powerful.  Despite a language barrier (and I honestly loved that the human and animals couldn’t talk with one another), she manages to impart wisdom and respect for the Forest into him.  This, she hopes, will make him a part of the Forest and unlikely to cause the destruction that all of the animals fear he portends.  The ending of The Prince Who Fell From the Sky is unequivocally perfect.  It’s realistic, heartwarming, and sad all wrapped into one.  Plus I have to say, that I totally dig this cover.

While I obviously have many kind things to say about John Claude Bemis’s The Prince Who Fell From the Sky, I will admit that this story didn’t really grab me.  It was well done, unexpected, and made me think from a new perspective, but at the same time it was very easy to put down, and didn’t have me longing for more.  I feel descriptions of this one as a post-apocalyptic Jungle Book are fairly on the nose, though that is another story I was never enraptured by.  Personally, I could take it or leave it, but I do feel that it will be a better fit for many young readers.

Likelihood that I’ll be back for more:  This was my first John Claude Bemis, and while I enjoyed it, I didn’t fall madly in love and am not sure I will be picking up the Clockwork Dark trilogy.

Recommended for: They’ve pitched this one more to fans of post-apocalyptic fiction, but I personally feel it’s a better fit for fans of animal fantasy such as Redwall, Wattership Down, The Jungle Book or the Warriors series.  Nice crossover appeal!

Get a second opinion:
Bookalicious.org
The Intergalactic Academy
Kiss the Book