Review: The Hero’s Guide to Saving Your Kingdom by Christopher Healy 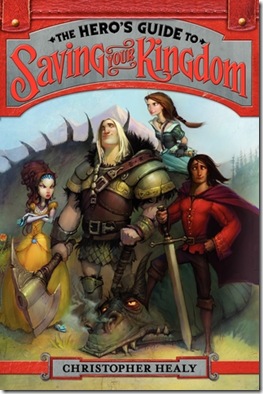 For anyone who’s ever thought:

The Hero’s Guide to Saving Your Kingdom by Christopher Healy is the book for you!

Welcome to the League of Princes!  Princes Charming that is.  Not to be confused with Prince Charmings.  Prince is the noun, after all, it’s what gets pluralized.  Like Attorneys General or Culs-de-sac.  Actually, the later is French and I sucked at French for the one semester I took it, so I can’t tell you if ‘cul’ is a noun, but I can tell you that the plural of cul-de-sac is culs-de-sac and not cul-de-sacs as is often said.  *Sigh.*  *Removes Grammar Nazi hat.*

Ahem.  Anyway.  The Princes Charming, as you know them, are better known in their own circles as Frederic (that’s Cinderella’s prince), Gustav (that’s Rapunzel’s prince), Liam (that’s Sleeping Beauty’s prince), and Duncan (that’s Snow White’s prince).  Unfortunately for them, the bards didn’t give two licks about their fame, and composed the songs all about the ladies, completely leaving out any identifying markers and causing the ambiguous ‘Prince Charming’ title.  They’re all a bit put out about it (and rightly so), but they each have some bigger issues to contend with.  Frederic is afraid of, well, everything, Gustav is always one to fight first and ask questions later (or never), Liam’s head is getting a bit big what with all the hero work and praise, and Duncan is, for lack of a better term, weird.

Ella (that’s Cinderella’s real name) wants adventure, Rapunzel wants to help people, Briar Rose wants to marry her Prince Charming (but she is absolutely horrid and needs to learn that you can’t always get what you want even as a princess), and Snow White just wants some ‘me’ time.  Thus, feeling alone, cast out, or on the run, the Princes Charming come together to save the day and put names to their fame.  Of course, this means battling the evil witch Zaubera, destroying her Supreme Scheme for Infamy, and putting a stop to her Grand Finale of Doom.

The Hero’s Guide to Saving Your Kingdom is about as much fun as anyone can or should have reading a book.  The villains are dastardly, the heroes are flawed, and quite frankly any author who pushes foreshadowing on over into the spoiler territory gets a win in my book.  It’s not quite like Shakespeare flat out telling you how Romeo and Juliet is going to end, but it does paint an interesting picture when you’re starting out.

All of the characters in The Hero’s Guide to Saving Your Kingdom are wonderful.  I loved them all.  The good, the bad, and the ugly.  Okay, I hated Briar Rose, but I loved Zaubera (I mean come on people, she has a thesaurus spell so that she can insult people more creatively), The Bandit King, and Reese.  I love that Healy points out (repeatedly) how silly the notion is that you could love someone you’ve never even met, that his damsels are not in distress, and that his hero’s heroics are questionable.  Ella, Rapunzel (I’m hoping to see more of her in the next book!), and Lila (Liam’s little sister) are all strong young women who aren’t afraid to save themselves.  The princes, with the exception of Liam, are all victims of circumstance more than anything else.  Liam, the one true ‘hero’ among them, isn’t perfect either, he has a lot to learn about utilizing others’ assets and diplomacy.

The Hero’s Guide to Saving Your Kingdom can teach anyone a lot about fairy tales, and a lot about life.  It’s fun, adventurous, and informative!  I highly recommend it to middle grade and fairy tale lovers of any age.  I also have to say that the art is wonderful, but unfortunately, the e-galley copy that I had only had art for the first few chapters, so I can’t say much about it other than that I liked what I saw!  I loved the cartoony look, and the reality that the princes were not all handsome, and the princesses were not all perfect.  I do plan on purchasing a hard copy so that I can reread and view to my heart’s delight!

Likelihood that I’ll be back for more: I cannot wait for the sequel to this one!  Healy mentioned it in a video interview for Fairy Tale Fortnight on The Book Rat and I am all over that!  Also the entire time I was reading this I kept thinking ‘this book needs a movie deal…omg somebody please make this into an awesome animated feature!’ and I totally called it!  Fingers crossed, I so hope they do a good job with this one, it has the potential to be amazing (I’m thinking like How to Train Your Dragon awesome here).

Recommended for: I want to start shoving this book into so many kids’ hands, and kind of want to have a baby and instantly age them to an appropriate age that I can read this to them.  That’s a justifiable reason to have kids, right?  Any fairy tale fans will love this one, particularly if you also enjoy middle grade and some light, adventurous fun!

Real life repercussions of reading this book:  I just have to say that Walden Pond Press is quickly becoming one of my favorite imprints.  After reading this, Neversink, and Breadcrumbs, I am beginning to wonder if they can put out a book I don’t love.

Get a second opinion:
Mundie Kids