Review: Tessa Masterson Will Go to Prom by Brendan Halpin and Emily Franklin 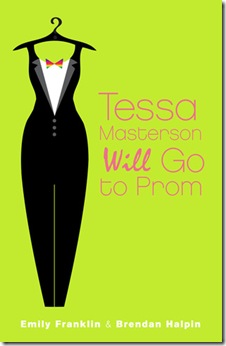 Lucas and Tessa’s friendship is the stuff of legend in their small Midwestern town. So it’s no surprise when Lucas finally realizes his feelings for Tessa are more than friendship and he asks her to prom. What no one expected, especially Lucas, was for Tessa to come out as a lesbian instead of accepting his heartfelt invitation. Humiliated and confused, Lucas also feels betrayed that his best friend kept such an important secret from him.

What’s worse is Tessa’s decision to wear a tastefully tailored tuxedo to escort her female crush, sparking a firestorm of controversy. Lucas must decide if he should stand on the sidelines or if he should stand by his friend to make sure that Tessa Masterson will go to prom.

Emily Franklin and Brendan Halpin tackle both sides of a ripped-from-the headlines story to show that true friendship will triumph after all.

So…this one’s getting filed under ‘book guilt’ because I honestly had that mental/emotional debate with myself where I wasn’t sure I could be honest about my mediocre feelings for this book.  Why?  Because while I do want to be respected as an honest reviewer, I also don’t want people to get the impression that I harbor views or beliefs that I most adamantly do not.  On the flip side, I can’t pretend to be gung-ho about a book that I didn’t entirely enjoy reading, that wouldn’t be fair to me or that book.  So I just want to say here and now that I am 100% pro gay-rights, and my thoughts on Tessa Masterson Will Go to Prom aren’t some anti-gay statement.  I don’t feel guilty for giving the book a ‘meh’ review, but I do feel guilty that I even considered fudging things to make myself feel better about it.

I have to confess—there are few things I was more ambivalent about as a teen (and still am) than prom.  So maybe that should have been a clue right there that a book starring the word ‘prom’ wouldn’t really be the perfectly fitting glass slipper I’ve been waiting on.  And then when right at the beginning, Luke (one of our two protagonists) asks Tessa (the other) to prom with a grand gesture the whole town can see, I really should have just stopped.  Because I’m that girl.  The one who hates grand gestures and public displays of love of a giant scale.  I hate it when people propose on billboards at sports events, heck, I hate it when people propose in public period.  Something about it just makes me so uncomfortable and awkward.  These were the clues I should have taken and just not read this book, but I didn’t want to let something like the P word intimidate me out of a read, so I powered forward.

Here’s the lowdown.  I’ve determined that I’m not really a fan of the ‘let’s get together and write a book from two characters’ points of view…we can each write a character and go back in forth in first person perspective!’ books.  I read Dash and Lily’s Book of Dares which was also a miss for me, and even though I really liked The Future of Us, I can acknowledge that this is not a style I enjoy.  And then there was the fact that this book had “ABC Family Special” written all over it.  You know, if ABC Family were the type of channel to support “the gay agenda” (I’m assuming they’re not, but I could be wrong.  Modern Family is on ABC).  It was very agenda-driven.  A ‘we have a message!’ type book, that’s so steeped in warm fuzzies and fond sentiments by the end I kind of felt like I was drowning in it.  Sure, it makes you feel good inside to see the things you believe about friendship, love, family, and being who you really are regurgitated so blatantly on a page, but it doesn’t challenge you or make you think.  Tessa Masterson Will Go to Prom is a great book for teens who may need to see a happy ending come out of a ‘gay in small-town middle America’ story, but I don’t think that it’s going to change anyone’s mind in regards to their stance on sexuality.  And that’s okay!  Not every book needs to be the book that challenges the way people think, and sometimes people really need the support and to feel good at the end of the day, but it was all a bit too hug-it-out for me.

The “ripped-from-the-headlines” story that Tessa Masterson Will Go to Prom was based on concerned a Mississippi student, Constance, whose high school prom was cancelled after the school informed her she could not attend prom with a girl, or wearing a tux.  You can read a short ACLU summary here.  Now, admittedly, I don’t know the gritty details of this story, but I had a hard time swallowing a lot of the events in Tessa Masterson Will Go to Prom.  For example, the school does nothing when Tessa’s locker is repeatedly vandalized, to the point that her school work (and presumably) textbooks are destroyed.  In fact, they seem to support the vandalism, and even the custodian will do nothing to help clean the locker indicating that she deserved it.  The school suspends students who openly support Tessa, and indicate that they will attempt to negatively affect students’ acceptance and scholarships into colleges as a result.  I find it pretty tough to believe that professionals in this situation, regardless of personal beliefs, would openly support and participate in this type of bullying of any student for any reason.  I find it particularly hard to believe that not a single adult in this school seems to have stood up for this student.   Tessa Masterson Will Go to Prom was so busy highlighting the negative to make it all that much bigger of a turnaround by the end that they diminished the positive to an unrealistic level.

My final nitpick is that they used fake brand names close to but not quite the same as the real thing—I hate when books do this.  Can someone explain this to me?  Is this a result of not wanting/having to pay some sort of fee for mentioning Twilight and Good Morning America?  Because honestly?  It just makes the whole book feel like a knock-off brand to me too.  And I don’t care what people try to tell you, knock-offs are pretty much never as good as the name brand.

I will close in saying that there were some great, positive aspects to this book, and I think a lot of readers will love it.  I’d even recommend it if I met the right person for it.  Tessa’s family was wonderful, and my favorite character in the book was Luke’s mom who was downright awesome.  Luke was a bit of a douchenozzle, but as I’ve gone on long enough I suppose I shouldn’t go off on him too, especially since he spends so much time trying to make up for himself.  At any rate, don’t take my review as the end-all-be-all of Tessa Masterson Will Go to Prom.  I’ve included links to some more positive reviews to give you some rounding.

Likelihood that I’ll be back for more:  I think I’ve pretty well determined that not only was this book not really my thing, this type of book isn’t really my thing.  To the point that I’ve considered crossing books like Will Grayson, Will Grayson off my list, because I’m pretty sure it just won’t click because of the narrative style.

Recommended for: LGBT teeens, contemporary fans, people who don’t physically cringe or gag over things like grand gestures and prom.

Real life repercussions of reading this book:  I just want to share this response to “I’m Christian, Unless You’re Gay” that came out last week.  I feel like it brought up a lot of the same issues as Tessa Masterson Will Go to Prom, but in a way that made me think and feel more than this book was able to.