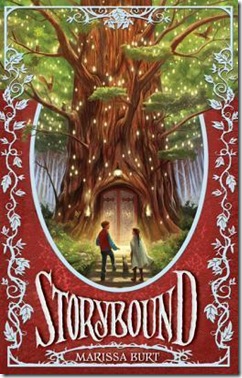 A sparkle caught her eye, and she slid some of the heavier volumes aside.  There, as if it had fallen behind the front row of books, a scarlet volume lay hidden, its cover interworked with shimmers of silver.  Una brushed off the thin layer of dust that muted the striking color and traced the leafy pattern.  She followed the brightness of the silver over to the spine.  There was no title, no numbers to mark the book’s place in the ordered library catalog.

“Curious,” Una murmured.  She flipped the book every which way but found no inscription.  It sat fat and heavy in her hand, and she paused for a moment before opening the beautiful filigreed cover.  All the pages had the same pretty silver lining, and Una turned them with reverent fingers.  Then she stopped.  She stared hard at the first page.  “The Tale of Una Fairchild,” it said in a sharp black script.  She read the line again, wondering if she was imagining things.  She was Una Fairchild.

Imagine you’re an actor on a long standing television series.  Life is good, you have steady work, a steady paycheck, and you’ve gotten to know your character pretty well.  And then one day, reading your script for the next episode, you realize something horrible.  You’re being written out.  Written out!  You’re done.  How much does that feeling suck?

Now, imagine that you’re a book lover going about your everyday business.  One day, while reading, you find yourself suddenly displaced and surrounded by…well…the story.  You’ve been written in.  Written in!  Is that feeling not as elating as the feeling of being written out was crappy?  Welcome to the joy of Marissa Burt’s Storybound.

Storybound is one of those incredibly aptly named books that works on many levels, the most literal being that Una is bound for Story, the land where characters are trained for parts, and live out the stories we read.  The young (people and talking animals, and I’d assume other creatures as well) go to school to train to become a part.  They take classes as heroes, villains, ladies, and more.  There appear to be many different areas of Story, but Storybound is concerned with the fantasy realm, wherein those stories we know as fairy tales are enacted.  Honestly, even having read it, I’m not 100% clear on how it all works, but here’s the best explanation that I found:

Peter shook his head. “It’s not like that. We don’t read the stories. Oh, we know about the famous characters and all,” he said, and pointed to Lenora, “But it’s people out there, in the land of the Readers who read our Tales.”

Una looked at the pixie’s smiling face. The land of the Readers. Like the one where Una had come from. Like home. “So when someone reads ‘Lenora in Neverland,’ Lenora is acting it out here?”

Peter was staring back at the kitchens. “Right. Although it’s not acting so much as living out a Tale.”

When Una finds herself written in (WI) to Story, it becomes clear to her and her new friend Peter that there is a serious plot afoot.  They’re just not sure quite what.  There haven’t been any WIs since they were all killed when the Muses broke their oaths and the Tale Keepers took control.  Some believe that the Muses are still out there, and that a King will someday return to rule Story, while others jostle for power over the people.  Una needs to find out why she’s in Story, and what exactly has happened in the past to bring the land to where it is today.

There were many good aspects of Storybound.  It took a whopping six pages to really get into the action, and it didn’t really let up for the duration.  Marissa Burt cleverly took elements of two trends that are currently very popular—fairy tale retellings and dystopias—and utilized them in a unique way.  The political situation in Story is very like that we see in a dystopian novel.  Knowledge is being kept from the masses as a form of control, an inevitable underground rebellion is forming, you know the drill.  Match that with the twist of a world where people are raised to perform as the fairy tale characters we all know and love, and you have some fantastic story elements.

Unfortunately, for me, Storybound didn’t really pan out.  The plot seemed convoluted, and I can’t quite put my finger on why.  I’m not sure if there were too many characters with not enough development, lack of strong enough world building, too complicated of a back-story…I honestly can’t say.  It just didn’t really click for me, but I do feel that each of those things played a role.  Storybound was a book that didn’t show you the story, it told you the story.  I didn’t feel anything because as a reader I wasn’t connected to the characters or their adventures.

The characters to me weren’t logical, their actions and personalities seemed inconsistent to me.  For example, Snow seemed like a classic shallow mean girl, but when her ‘depth’ was shown, her mean girl actions made less sense to me.  She supposedly genuinely likes Peter, and yet in their school practical she’s snippy, mean, and sits around filing her nails.  I understand the concept of putting up a mean front as a shield, but not in this way when alone with someone you both genuinely like and need to succeed for a passing grade to achieve your goals.  Then, for a logic example, there is a point during another observed exam, where Una is careful of what she says, knowing it will be recorded, but not careful about what she does.  Are actions not recorded as well?  Also, when Una is first written in to Story, she is wearing a cape and wielding a knife, and never really seems to bat an eye about this.  Where do these objects come from?  I get that she’s not a chicken, but she’s cool with knife wielding out of nowhere?  I just don’t see it.

Too much about Storybound was inconsistent, or unexplained for me.  I think the difference between an okay story and a great story is the ability to evoke emotion in readers, and immerse them in a way that makes them feel part of the story.  Ironically, I did not feel like I was in any way written in to Storybound.

Likelihood that I’ll be back for more:  Sadly, I didn’t really click with Storybound, and do not think that I will be back to see how the story ends.  I was particularly annoyed that this book holds a massive cliffhanger (I am a cliffhanger hater), so beware if you feel the same.

Recommended for: Fans of fairy tales, The Neverending Story, and Inkspell.  As per usual, I have included some much more positive reviews from reviewers I trust so that you can have a fair and balanced view of Storybound.

Get a second opinion:
Books Take You Places
Bookalicious.org (by Tara)
Bibliographic Monologues