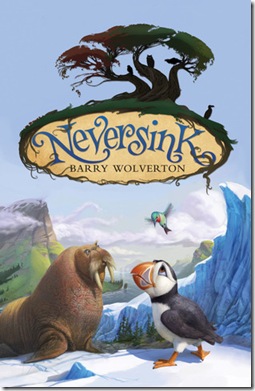 Birds of the Northerly World

Excerpted from THE WALRUS GUIDE TO LESSER CREATURES, Sixteenth Edition

Puffin: Smallish, squidgy, improbable looking.  Relatively quiet and well-mannered, expect when provoked.  Not to be confused with a penguin, or a parrot, or a cross between a penguin and a parrot.

I would hug this book if it weren’t physically impossible for a human and a book about a puffin, a walrus, and a hummingbird to embrace.  It has everything I love about a fantastic middle grade book.  Adventure, fun, wit, illustrations, a dastardly villain, love, friendship, PUFFINS, and of course, a map: 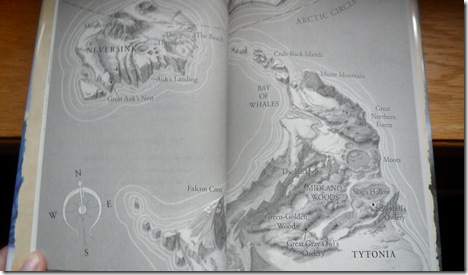 Neversink by Barry Wolverton tells the story of an improbable hero, Lockley Puffin, and his adventure that comes full circle.   Neversink is an island populated by auks (a family of fish-eating birds that includes puffins, razorbills, murres, and guillemots) lying off the coast of the mainland, Tytonia, where, if you will forgive the expression, the owls rule the roost.  When the fear arises that the small animals owls consider food are infected with the sickness, one ambitious owl takes it as an opportunity to oust the king and put the auks of Neversink back under the owls’ thumb (yes, I know owls don’t have thumbs, it’s a figure of speech!).  Rozbell, the new owl ruler with a Napoleon complex, enacts a fish tax, indulging in the scrumptious delights that are Lucy Puffin’s fish smidgens.  It would appear, however, that Rozbell’s appetite cannot be quenched (while of course, those around him continue to be quite peckish), and soon the demands upon the auks rise.  Lockley refuses to let such a burden fall upon his people, particularly upon his wife Lucy.  But with a population of birds who have many mottos about not making waves, how will a squidgy puffin, a scholarly walrus, and an excitable hummingbird save the day?

Oh friends, I loved this book.  Barry Wolverton’s writing was so unabashedly clever and full of wit that I found myself constantly smiling and chuckling while reading Neversink.  It’s the type of book that is written perfectly for the intended age, and yet has so many quick references and jokes in it that an adult will most assuredly appreciate them as well.  Taking place before the appearance of humankind on the globe, Neversink is full of funny lines that reference things we know as familiar (like pants), and then reminders that those things don’t exist.  Egbert, our dear walrus, even has some good Beatles and Alice in Wonderland references up his metaphorical sleeve.

Not only was the writing fun and clever, but the story and characters were as well!  I appreciate it so much when a middle grade author doesn’t shy away from realities such as death.  Barry Wolverton doesn’t make it ghastly or inappropriate, but he doesn’t do the Disney thing and have characters just fall from high places never to be seen again either (I suppose when the bulk of your characters can fly, this tactic would be rather misguided).  His villain, Rozbell, has depth, and isn’t just a mad-bird lusting for power for power’s sake—you can really see how he becomes corrupt, and understand his thought process, even if it’s selfish and cruel.  I love a well-done bad guy!

And of course I was going to love a book where our hero was a puffin!  Do you remember how excited I was when I brought this one home?  I just love them so much!  Even if they can be rather indignant at times.  It would seem that calling a puffin a penguin, is much akin to calling a Scott English.  Lockley and Lucy were both perfect heroes in my mind because they didn’t set out to be.  They’re scared, they don’t want to make trouble, make things worse, or defy authority, but we all know that everyone can be pushed too far.  When pushed too far, some characters break, but heroes push back.

In the end we see that like Neversink, not every good story needs a moral.  Some adventures just need to happen.  Sam Nielson’s illustrations are whimsical and perfect for the setting, as mentioned I am a particular fan of the map.

Likelihood that I’ll be back for more:  Neversink was such a fantastic debut!  I would love to see other stories from Tytonia (like one involving badgers perhaps?), but will happily check out whatever Barry Wolverton comes up with next.

Recommended for: Anyone who enjoys great middle grade, in particular animal fantasies like Redwall or Legend of the Guardians.  Because apparently some owls are inherently evil.

Real life repercussions of reading this book: The boyfriend said we can dress up our squidgy Wocket as a puffin for Halloween!  What do you think, can he pull it off? 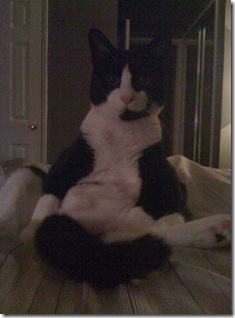 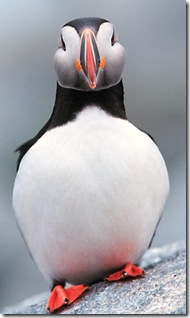 With Bated Breath: May New Releases »
« In My Mailbox (15): A personal statement and then some fun!