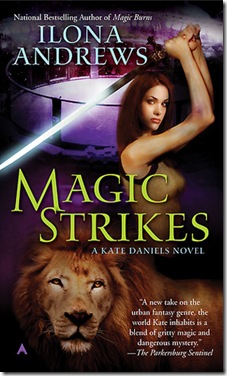 Drafted to work for the Order of Knights of Merciful Aid, mercenary Kate Daniels has more paranormal problems these days than she knows what to do with. And in Atlanta, where magic comes and goes like the tide, that’s saying a lot.

But when Kate’s werewolf friend Derek is discovered nearly dead, she must confront her greatest challenge yet. As her investigation leads her to the Midnight Games- an invitation only, no-holds-barred, ultimate preternatural fighting tournament- she and Curran, the Beast Lord, uncover a dark plot that may forever alter the face of Atlanta’s shapeshifting community.

One day Ilona Andrews sat down and thought Hmmm….you know what would make the Kate Daniels series even more awesome? Gladiators! And then she proceeded to write one of the greatest Urban Fantasy books out there. I realize as someone who has read barely any Urban Fantasy I can’t really say that with authority, but you know what? Haters can shove it, it’s true.  I loved this book, and I can see why so many people were telling me this was the point in the series I wanted to get to.  Of course I greatly enjoyed Magic Bites and Magic Burns, but Magic Strikes is where everything really clicks into place, finds its pace, and doesn’t let go.

In Magic Strikes we get all of the characters we’ve loved from the past two installments, and my love of Kate Daniels with her biting snark, quippy lines, and fast blades grows and grows with every page.  Ilona Andrews has this amazing ability to incorporate cliché lines and phrases in a way that don’t make her books seem passé, it makes them seem real.  You get attached to her characters because you can really see and understand how they think, and Kate and crew think like some of the best heroes around.

Magic Strikes’ plot line surrounds the one thing the Pack is well and truly not allowed to screw with—The Midnight Games.  But what fun would a Kate Daniels book be without Derek, Jim, Curran, Rafael, and Andrea?  Easy answer: none.  Okay strictly speaking, Andrea isn’t a member of the Pack, and Magic Bites was plenty of fun without her and Rafael, but seriously?  Bouda fun is the kind of fun I like to see, and now that I’ve had a taste, I don’t want a book without it.  Here is where I would say ‘You here me, Ilona?!’, but she’s already obliged me by writing Gunmetal Magic.  I DIGRESS.

So if you’ve seen the movie Gladiator, or you know, read some Roman history, you have a pretty good idea of what The Midnight Games entails.  And if you’ve played World of Warcraft (yes I am revealing just how nerdy I am to ya’ll today), you have an even better idea because essentially it’s arena fighting between individuals and teams that are all sorts of freaky.  We’re talking vamps, shapeshifters, minotaurs, magic users, trolls, golems…you know, all of those things that go bump in the night locked in an arena to rip each other to shreds for your viewing pleasure.  Couple that with a dark plan to rid Atlanta of the Pack, some revelations about Saimon, more excellent mythology, some good ol’ fashioned street fighting and subterfuge, and you’ve got one heck of a fast-paced plot that had every cell in my body screaming AWESOME while I read.

But of course, there’s also the reality that Ilona Andrews is a total and utter tease.  And I kind of love it.  I am now officially so in love with Curran, I can’t even stand it.  He cares about Kate so much, it’s ridiculously obvious to pretty much anyone but her, and I love the developments in their relationship that we see in Magic Strikes.  I want to gab about it for pages, but I don’t want to be all spoilery, so I’ll shut my trap and save my fawning for the next book.  Let’s just suffice it to say that Kate and Curran are quickly moving up the list of my all-time favorite couples, and I can’t wait for more.

Likelihood that I’ll be back for more:  100%, already have the next book on hand and ready to go.

In My Mailbox (16) »
« Audio Review: Fever Crumb by Philip Reeves