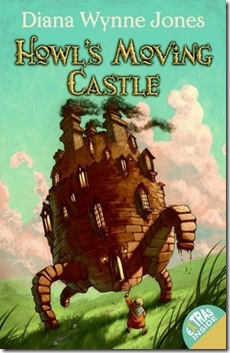 Sophie Hatter is certain she is doomed to a boring life.  As the eldest child, she is bound to fail while her younger sisters go on to happiness.  This inevitability seems to come to fruition when their father dies.  Lettie, her middle sister is sent to apprentice at the town’s bakery where she is likely to catch a fine husband, and Martha, the youngest, is sent to Mrs. Fairfax to apprentice the witch and learn her spells and power.  Sophie, fatefully enough, is stuck managing the family hat shop with her step-mother.  Resigned to her woeful inheritance, Sophie breaths life into her work, creating hats of beauty that bring in business from all corners.  Intrigued in her skills, The Witch of the Waste pays a visit to the shop, where she ends up cursing Sophie with old age, while ensuring that she won’t be able to tell a soul.  Sophie determines that there’s little point in staying around, and decides to strike out and seek her fortune.  As her fortune would have it, she ends up at Howl’s door.

This book.  I loved this book.  It was so much fun, full of fantasy and wonder, I honestly don’t have a bad word to say about it.  This is the kind of book that makes me cry over not having read it as a child, and I want to push it into the hands of anyone and everyone I know who loves middle grade and fantasy, no matter their age.  Diana Wynne Jones’s writing is so very whimsical and smart.  I love middle grade authors that are so utterly intelligent.  I feel like too many times the age group gets written down to, but not in this case.  In fact, the characters in Howl’s Moving Castle aren’t even middle grade themselves!  Sophie is eighteen (or about 90, respectively), Howl is in his 20s; in my mind Howl’s Moving Castle brilliantly includes characters of all ages, managing to write them faithfully to their differences and similarities.

Sophie is timid, and lacks confidence as a young woman, but almost instantly upon becoming 90, she sheds the uncertainties and delicacies of youth.  She doesn’t have to be self-conscious of the things a teenager does, and so Sophie allows herself to be the hardened, nosey, insistent woman she really is.  I love it.  I love that Sophie is constantly doing things she knows will upset Howl, but she never lies about them when he confronts her, she just owns up.  Howl, of course, is a wonderful character.  What he appears to be on the surface, and what he really is underneath don’t quite line up, but yet he manages to be completely himself at all times.  They’re both rather saucy really.

The other characters in the castle, Michael and Calcifer, are equally wonderful.  Michael is the 15 year old apprentice boy, and Calcifer is the fire-demon who helps to power Howl’s moving castle.  Calcifer entreats Sophie to stay (and she very much wants to, because honestly, where else would she go?) and break the contract locking him and Howl together.  Michael, obviously annoyed with Sophie initially, quickly softens and begins to take to her.  So many of the characters in this book seem to have such large hearts, despite their appearances (and possibly their intentions).

The story of Howl’s Moving Castle is full of magic, whimsy, and spectacle.  I loved that while the story stayed strictly tacked on to Sophie, it was very clear that everyone else was having marvelous adventures as well.  I find it enchanting that we get to know this, to glimpse these other stories, without really being privy to the details.  Also, I found Howl’s Moving Castle to be pleasantly unpredictable.  I was never sure quite which way the story was going, and I loved that Sophie and the others seemed to figure things out before I did.  I hate always being the first to know!  I really couldn’t recommend Howl’s Moving Castle more, and I’m certain I’ll be reading it again in years to come.

Likelihood that I’ll be back for more:  Even though Howl’s Moving Castle can be read as a standalone, I already can’t wait to read more stories from Ingary.  I’ll be picking up Castle in the Air next time I pillage the tween stacks.

Recommended for: Anyone who loves MG, fantasy readers, people who enjoy whimsy and hats.

Real life repercussions of reading this book:  While I absolutely adore the movie Spirited Away, and really liked both Ponyo and Princess Mononoke, I’ve never actually watched Miyazaki’s Howl’s Moving Castle.  Consider that remedied as soon as I finished this book!  I also haven’t seen Castle in the Sky, which apparently has nothing to do with Castle in the Air despite the similarities…will have to check it out as well.