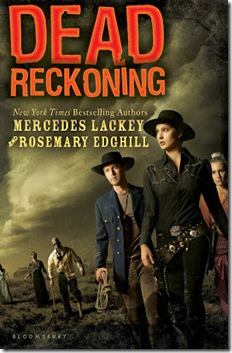 Jett has seen them—the walking dead. She was there the night they attacked Alsop, and only escaped with her life through the dedication of her faithful steed. When after fleeing she comes upon Gibbons and White Fox, who are both investigating mysterious disappearances, they are hard pressed to believe her tale. However, they’ll learn soon enough that things are like good ol’ Sherlock said and “when you have eliminated the impossible, whatever remains, however improbable, must be the truth” (Sir Arthur Conan Doyle, The Sing of the Four).

Deep in the heart of Texas three young souls, each on their own mission, band together to battle (you guessed it) zombies.  Jett Gallatin is a young woman passing as a man, gambler, and sharpshooter as she scours the west looking for her twin brother who disappeared at the end of the war.  Honoria Gibbons is a headstrong woman with a scientific mind set out to investigate mysterious disturbances and whether or not they can be credited to the invisible air ships someone is attempting to sell her father.  White Fox (who for some reason isn’t even mentioned in the publisher’s blurb, he is a main character, see him there on the cover behind Jett and much more visible than Gibbons?) is a white man raised by natives, working as a civilian scout for the US Army set out to investigate what has happened to a soldier’s family.

Is anyone else extremely turned off when books are pitched as ‘perfect for fans of _________’?  This almost always assures I won’t pick up a book.  I feel like I’m constantly thinking ‘oh, this is another dystopian that wants to be the next Hunger Games?  No, thank you.’  And Dead Reckoning fell into that pile for me when I read the lines “perfect for fans of Cowboys vs. Aliens and Pride & Prejudice & Zombies.”, particularly since I have negative interest in either of those.  But still, I haven’t read any Mercedes Lackey yet this year, which is kind of a *gasp* moment for me since she’s one of my all-time favorite authors and I read through the Queens Own and Mage Winds trilogies on a frequent loop.  I’m not a huge fan of most of co-authored stuff, but I’d never read any of Lackey’s non-fantasy work, and since girls dressed as boys is a surefire trigger for my book sense, I had to give Dead Reckoning a go.

Needless to say, Dead Reckoning did not disappoint, but it didn’t impress either.  The story of a zombie army being raised and controlled in the old west of Texas was interesting.  I really liked that because Jett was from New Orleans she was familiar with the notions of hoodoo, and found the notion quite hair raising, but that Gibbons insisted on a more scientific base for the creatures’ existence as well.  A crazed cult leader gone over the edge, spoiling his ingenious mind with notions of grandeur made me just uncomfortable enough to be on the edge of my seat through portions of our story.

Each of our three main characters had an interesting foundation.  Jett is a highborn lady of New Orleans whose family has been destroyed by the Yankees after they conquered the south in the Civil War.  She refuses to believe her brother, Philip, is dead, and sets out to find him.  Jett doesn’t put on her masquerade because she despises girly things, in fact, she longs to return to the days of petticoats and luxury.  Unfortunately, she knows that her disguise is the only thing that has kept her safe and alive in the west for the past two years.  Gibbons is a scientific mind, raised by a father with such tunnel vision into his scholarly pursuits that he hardly noticed she was a girl.  She is logical, intelligent, and bent on having an explanation for everything.  She refuses to be belittled because she is a woman, and is at times the envy of Jett who lives in hiding.  White Fox was raised from the time he was quite young by natives who took him in after his wagon train was destroyed and he was the only survivor.  Part of me wished he would have just been a native himself, but part of me also loves this storyline.  I was obsessed with Strawberry Girl by Lois Lenski and other stories of white children raised by native tribes as a child, so needless to say, I took a liking to White Fox.

Now, notice I said ‘good foundation’ back there.  On the surface, these characters and the story had a lot of potential, but in the end it all sort of fell flat for me.  I constantly felt as if I was being told the story, rather than shown it, and it was neither strong enough in plot or character development to make up for a lack of the other.  I just kept wishing for more depth.  I wanted to feel the developing friendships between Gibbons, Jett, and White Fox, I wanted to care about their pasts and potential futures.  I wanted to be afraid of the zombies, and feel chills across the back of my neck when the air got cold.  But I didn’t.  In fact, Dead Reckoning did so little to quench my gore craving, I wasn’t sure I cared if the things did destroy Texas.

The same lack of oomph goes to the whole steampunk element of this book.  I’ll be honest, I’m not really sure why it was there when it seemed unnecessary.  Other than the brief mention of air ships (which as far as we know, did not actually exist), and Gibbon’s auto, there wasn’t really anything steampunk here.  I’m not sure why a book can’t be set in the Victorian time period, have scientifically minded characters, and not be an attempt at steampunk, when in fact this time period was full of scientific pursuits and progress.  For example, I would have love to have seen more focus on the railroads or telegraph!  I feel like steampunk writers need to go big or go home, and in this case it needed to be ramped up quite a bit.  I did like that it was steampunk in the wild west, which was a fantastic and fresh idea, I just wasn’t digging the application.

All things considered, Dead Reckoning was a quick read with a new take on some old tropes.  There’s no romance, smart and strong women, zombies, and a bit of a cult.  If all these things appeal to you, I’d say it’s worth a shot!  Since my own review is underwhelming, please check out some of the more enthusiastic ones I’ve linked below.

Likelihood that I’ll be back for more:  Eh, this wasn’t a bad read, but honestly if it weren’t for Mercedes Lackey’s name on the cover I wouldn’t have been willing to give it a shot.  I’m glad I did, but I’ll head back to Valdemar now, thank you.

Recommended for: Those interested in horror or steampunk in the old west (because hello, who wouldn’t be?), and fans of the authors.  I’m fairly certain this is being released as an adult novel, but it has definite crossover appeal for the YA crowd. This is a standalone but it was very not so subtly hinted that they would like to make it a series.  Bare that in mind if that sort of thing matters to you.

Salute Your Shorts: The Assassin and the Pirate Lord by Sarah J. Maas »
« In My Mailbox (17)