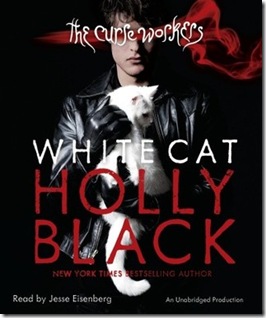 The first in a trilogy, this gritty, fast-paced fantasy is rife with the unexpected. Cassel comes from a shady, magical family of con artists and grifters. He doesn’t fit in at home or at school, so he’s used to feeling like an outsider. He’s also used to feeling guilty—he killed his best friend, Lila, years ago.

But when Cassel begins to have strange dreams about a white cat, and people around him are losing their memories, he starts to wonder what really happened to Lila. In his search for answers, he discovers a wicked plot for power that seems certain to succeed. But Cassel has other ideas—and a plan to con the conmen.

Sometimes I don’t really bother to figure out what a book is about before I pick it up.  When I decided to check out White Cat, by Holly Black, somewhat on a whim, it boiled down to 4 simple reasons: 1) It was available on Overdrive, 2) It wasn’t too long (I was burnt out from listening to 14-18 hour books) 3) It was by Holly Black, an author I’ve been wanting to read more of and 4) the series was wrapping up, so I could go through the whole thing without having to wait.  Needless to say, I was hoping White Cat would be decent, but didn’t expect it to be near as intriguing, original, or engrossing as it turned out to be!

Full disclosure: I’ve had a huge girl boner for con men ever since…well forever.  There’s something about grifters that is just undeniably sexy and alluring to me.  I blame my parents for glorifying The Music Man so much as a kid…you know that’s totes why I became a librarian, to meet my con man!  So…Cassel Sharpe?  Yeah, I’d hit it.  I probably wouldn’t even care if he were just using me as a means to an end (but he’d totally want to be strait with me because I’m the woman who would change his life).  I’ve never had a thing for Jesse Eisenberg before, and the second his voice came out of my headphones (yeah, I didn’t even read who the narrator was prior to checking this out), I had all sorts of thoughts flash through my head, most of which added up to: I don’t know how I feel about this.  But now?  After finishing?  I love me some Jesse Eisenberg.  I mean, I liked Zombieland a lot, but his other movies like Adventureland and Social Network were largely depressing views of the world and humanity, and since the kid comes across as a slightly less awkward and slightly more attractive version of Michael Cerra, I wasn’t exactly wringing out my panties for the guy.  But now I know that if I were to ever see him, I’d probably try to muster up the courage to tell him that I love his audiobooks: 1) Because it’s true, 2) Because I bet actors don’t get that a lot, and he’d totally want to have a night of splendor with me because of it, and 3) It’s cool, my boyfriend doesn’t read my blog. 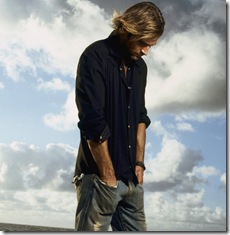 Where were we? Oh yeah, con men. Sexy magical con men. Sorry Sawyer, my heart was yours, but it’s been sold to another because you lack the literal magic touch.  Holly Black has created a world in which there are curse workers; humans who have the ability to change something with a single touch.  There are seven kinds of curse work: luck, dream, emotion, memory, death, transformation, and physical.  A curse worker has to touch you with their bare hands in order to work you, which is why everyone wears gloves all of the time, and a bare hand is terrifying to behold.  Working people is illegal, and has been for several generations.  People that were once held up, have now been cast down as lowlifes and criminals, the worst of the worst and the lowest of the low.  And for the most part, they’ve taken on this mantle.  Worker families have become the crime families of the world.  They can change your memories, change your emotions, make you believe what they want you to believe, and kill you with a single touch.  They are, suffice it to say, scary awesome.

Cassel’s family doesn’t run a crime ring, but they’re not too far off.  His mother is in prison for working men for money, his brother is working for one of the biggest crime bosses around, and him?  Well, he’s just trying to finish high school.  Cassel is the disappointing child, the one without the power to work.  Raised in a worker family, he knows all the tricks.  He knows how to work a mark, and can almost always manipulate those around him to get what he wants.  He’s haunted by his past, and the worst memory he has: killing his best friend, Lila, at age 14.  As Cassel struggles to find out what really happened to the girl he loved, he begins to uncover a reality that he’s almost better off not knowing.

Cassel is one of those bad boys that you just can’t help but have a thing for…because he’s also kind of a good guy.  Cassel wants to do the right thing, it’s not his fault that doing right by someone often means doing wrong by someone else.  Seriously, if this book doesn’t sound intriguing to you, then I think you might be broken.  It’s cool, I’ll get Cassel’s mom to work you into feeling like you must read this series.  Because really, you should.

Likelihood that I’ll be back for more:  I’m pretty sure there’s no question about that.  I’ve already checked the last two books out, and am most of the way through Red Glove as I write!

Recommended for: YA UF fans, chicks who dig con men, those who want a story that is dark and edgy with a male narrator—no fluff-n-stuff in White Cat!

Real life repercussions of reading this book:  Hey, did you guys know/notice that Jace Wayland from Cassandra Clare’s Mortal Instruments series makes an appearance in all three of these books?  Made my day in the “I spotted the pineapple in Psyche!” kind of way.

Get a second opinion:
Books and Sensibility
Chachic’s Book Nook
The Readventurer