Audio Review: An Abundance of Katherines by John Green 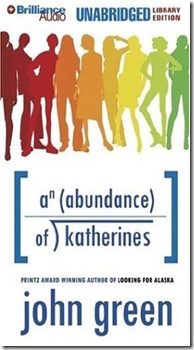 When it comes to relationships, Colin Singleton’s type happens to be girls named Katherine. And when it comes to girls named Katherine, Colin is always getting dumped. Nineteen times, to be exact. He’s also a washed-up child prodigy with ten thousand dollars in his pocket, a passion for anagrams, and an overweight, Judge Judy-obsessed best friend. Colin’s on a mission to prove The Theorem of Underlying Katherine Predictability, which will predict the future of all relationships, transform him from a fading prodigy into a true genius, and finally win him the girl. Letting expectations go and allowing love in are at the heart of Colin’s hilarious quest to find his missing piece and avenge dumpees everywhere.

I’m not sure why this didn’t occur to me until long after I’d finished An Abundance of Katherines that of course I was going to thoroughly enjoy it.  The whole ‘being attracted to someone with a particular name’ thing has The Importance of Being Earnest written all over it, and I don’t think it’s any secret that I am a fan.  And enjoy it I did.  Thoroughly.  An Abundance of Katherines was the book I chose to give my John Green V-Card to, and I really don’t think I could have made a better decision.  This book, to me, was hilarious, but not over-the-top-trying-too-hard ridiculous hilarious, completely-plausible-real-life hilarious.  The kind of hilarious that means you probably shouldn’t listen to this audiobook while working out if you have asthma, because you will inevitably have a laughing fit while already low on breath and have an asthma attack somewhere far from home and your inhaler that you left sitting by the sink.  Quite possibly when Hassan is having a fat kid asthma attack of his own.  So, so worth it.

Jeff Woodman, the narrator, has a pretty sweet backlog of audio goodness behind him.  I’ve listened to his narration of Midnight in the Garden of Good and Evil, and Life of Pi, but he also narrates books I’d love to listen to including The Westing Game, The Queen’s Thief series, and other John Green books.  Those are some legit credentials people, and he’s earned them.  His narration of An Abundance of Katherines was spot-on—not the kind of narration that makes a good book better, but the kind of narration that brings a great book to life and lets you consume it in an ideal format.

One of my favorite aspects of An Abundance of Katherines was that I did not like the protagonist, Colin Singleton.  Quite frankly, the kid was a tool, and I love well-written characters that are the types of people I would never hang out with enough to observe in real life.  I mean, I’m all for nerdome and smarty pants and what not, but Colin Singleton just takes it too far.  He’s the kind of kid who’s socially awkward, and knows he’s socially awkward, but only because he has a friend like Hassan to give him clues as to what is and is not interesting for other people to hear.  I was less shocked by the idea that Colin had been dumped by nineteen Katherines than I was by the notion that this dweeb could get nineteen girls to go out with him in the first place.  His social awkwardome doesn’t shut him up or turn him into an introvert, and I kind of love that.  Colin is who he is, and even though I wouldn’t be caught dead with the kid, more power to him for not compromising and for finding friends who do enjoy him for who he is.

Even though Colin is a quirky mega-brain character with many life experiences the rest of us will never have, I feel like he’s incredibly relatable.  He grew up labeled as a child prodigy, and now that he’s finished high school and is ready to move out into the world, he has to decide what it is he’s going to do that will mark his future.  Colin wants to matter.  I think most of us go through a similar experience at one point or another.  We all grew up with certain labels, and we all have to decide whether or not those labels will continue on with us, and what we’re going to do with our lives.  But, as the character Lindsey so poignantly puts it: “What matters to you defines your mattering.”  To Lindsey, her mom, and many people in Guttshot (the town Colin and Hassan end up in on their quarter-life-existential-crisis road trip), it’s stories that make us matter.  For Colin, it’s the idea that he could be a genius—he could figure out what it is that makes someone either a dumper or a dumpee.

An Abundance of Katherines is full of profound eureka moments about what it means to be an average person living life and what impact that might have, not on the world but on you.  It was hilarious, fun, and full of insight about becoming who you are supposed to be.  My one complaint about the audio version of this book is that you don’t get to see the equations and graphs that Colin writes for his theorem.  For someone very visual, like me, it was kind of hard to picture.  Luckily, other people have posted pics of them, like Chachic, whose review I’ve linked below!

Likelihood that I’ll be back for more:  Of course!  I’m reading The Fault in Our Stars for book club, and I plan to listen to Paper Towns and Looking for Alaska on audio.

Real life repercussions of reading this book: Um, remember that somewhat vague allusion to this book making you have an asthma attack it’s so funny.  Yuuup.  That was me.